One of the reasons I love crochet is that it looks so handmade, whether it’s a solid fabric, like the Mohawk hat, or something lacy. It probably doesn’t surprise you when I say that I particularly love the lacy look; I mean, it’s basically shadowlace that I’ve created. Anyway, here are a few of the projects I am working on right now or have recently finished. I’ve also made something for a lot of you, so if you want your project highlighted on here, send me a pic, and I’ll post it.

The Mohawk hat. I’m also making one in blues and one in greens for the brothers of the little boy who is getting this. 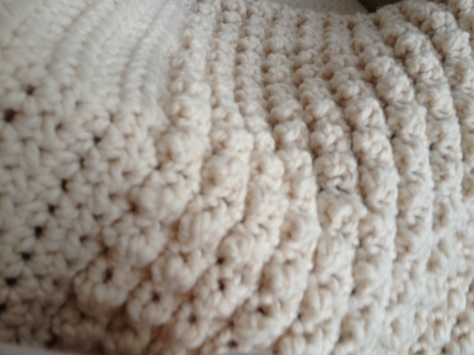 This is a detail from the afghan I’m making for our bed. It’s hard to tell (especially with my particular brand of fuzzy photography) but it’s made in a super bulky yarn, and the pattern is a checkerboard of plain squares and squares with bobbles (or bumps). 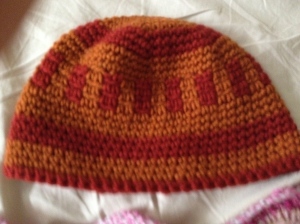 I made one of these scarves for myself, and one of the beanies for Kohl. We liked them so much, and they were so easy, that I ended up making a bunch for our friends up here for Christmas, all in different colors.

This is one of Kohl’s all-time favorite things I’ve ever made. It’s a simple throw that we have in our living room for cold nights, and it’s made with a bunch of leftover scraps from other projects.

This is one of the easiest and quickest things to make, and it’s one of my go-to gifts for baby showers. My aunt taught me to make them. All you do is crochet a little ruffle around the edge of the sock, throwing on a bead every once in a while, so you end up with a beaded ruffle. The color combinations are endless; I like to find out what my nieces are wearing for Easter Sunday and make socks to match. 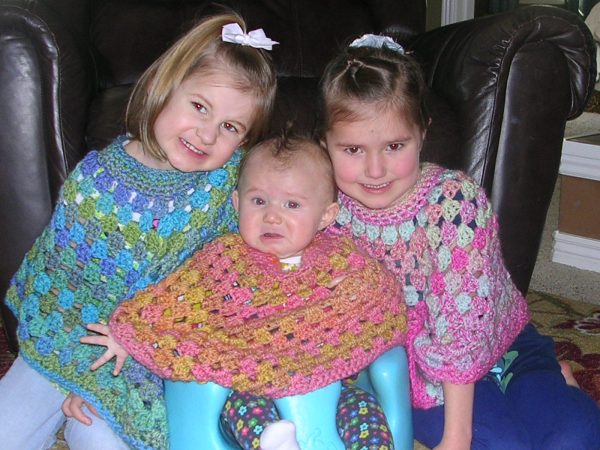 These are some ponchos I made for all of my nieces. The funnest part was picking out a colorway that each of them would love. The pattern is super simple, but every little girl seems to love it. (Except, apparently, Brooke in the middle there. I’m just going to tell myself she’s hungry.)

I don’t know if this satisfied those of you who wanted to see some of my projects, but it was super fun for me. If anyone wants the patterns I’ll scrounge them up (or write them down for the ones I made up). I’ll keep you posted as I finish new things.

P.S. I wanted to thank everyone for their very kind responses to my last posts. I am still terrified to throw all of this stuff out there, but I’m grateful for your words of encouragement.

This week has been hard.  I have spent basically the entire week curled up in bed trying to decide which hurt more: my stomach or my head. My head ended up winning. Hurray.

This is particularly frightening, because last time I was on dialysis one of the complications was a bout of Pseudotumor Cerebri. That’s Latin for spinal fluid collecting on the optic nerve, building in pressure and causing shatteringly painful headaches and blindness. I was blind for a couple of months before I had a surgery that relieved the pressure and restored most of my sight (although it is still way too easy to sneak up on me from the left).

This was the fear that kept banging against my skull with every painful throb of my painfully throbbing headache this week. Combined with my OCD, which tends to get far worse when my kidneys stop regulating my hormones, it transformed me into a gibbering basket case.

Now I’m going to say something that may surprise you based on the previous three paragraphs, which strike me as exceedingly whiny. I’m not writing this post to complain. I hate complaining; it makes me feel weak and victimized. In fact, letting the above details get out to anyone besides Kohl riles up every instinct for privacy and self-preservation that genetics and breeding have given me. No, I wrote this post to tell you about something marvelous.

There are two things that brought me back to normalcy. One was Kohl patiently holding me as I gibbered, and telling me over and over that it was probably just high blood pressure rather than a return of the Pseudotumor. (That may not sound comforting, but, believe me, it’s preferable.) The second thing that soothed my jangled nerves was crocheting.

For those of you whose interest in this post just plummeted, let me explain. There is a power in manually creating something. There is a magic in watching something you dreamed of take shape in reality. There is a beauty in letting the textures and colors play over your senses like a warm breath. There is a relief in having something in my life which I can control.

I’m working on a Mohawk hat for a little boy right now, along with a luscious, thick, cream colored afghan to go on our bed. As I worked on them this week, as I let the yarn rub against my fingers and watched my projects come to life row by row, I felt so much peace. In my life right now, inside my own body, there are processes of destruction taking place. This often leaves me feeling broken and bereft. The process of creation that I enact when I crochet balances me. I am powerful and magical and beautiful when I am crocheting.

May I suggest, then, to those of you facing your own personal darknesses, that you find something that fills you up, some part of your world that you can create. I have found it most effective when it is something I have to use my actual hands to do, like cooking or gardening. For you, it may be working on cars, or rebinding books, or painting furniture. It might be building model planes, braiding someone’s hair, or organizing a closet. When you find what it is, use it wisely as an outlet and a refuge, but not as an escape. There is solace in creation, and it is one of the most positive things you can do for yourself.

It really helps with gibbering, too.

It’s time to begin. I’ve put it off, but I can’t hold out any longer. This is where it all starts.

I created this blog in November, and I had great plans to start posting about what I was feeling as I looked ahead to the time when I would start dialysis for the third time. I even began writing a post, but I stopped in the middle of it and moved on to other projects. I kept telling myself, “It’s almost Christmas, and I have so much to do!” or “I think, all things considered, it’s a better use of my time to take a nap,” or even, “What on earth do people want with another blog to read?!”

On New Year’s Eve I finally realized the truth. We were down in Arizona, visiting family, and everyone was enjoying themselves, shouting out Happy New Year, setting off fireworks, excited for 2012, except me. All I could see ahead of me was the looming gray wall of another bout of dialysis.

For those of you who don’t know, dialysis is a process in which machines clean the blood of someone whose kidneys can’t do the job. It isn’t fun. In fact, it is often soul crushing. This will be my third time on dialysis. My original kidneys failed when I was a senior in high school. After three years of dialysis, I received a cadaver transplant. Five years later, my disease attacked my kidneys again, and I returned to dialysis. This time I was able to get a transplant only a year afterwards, thanks to my wonderful brother-in-law, Mitchell, who donated a kidney to me. Five years after that, guess who came knocking on my metaphysical door? That’s right: IGA Nephropathy and his good pal, Dialysis.

This is what I was facing on New Year’s Eve. My doctor had allowed me to put off the inevitable until after the holidays, but I knew that as soon as I returned to Salt Lake, the process would begin. I was so full of dread that night that I sat inside and cried on Kohl’s shoulder while everyone else was shooting off fireworks, and I LOVE fireworks. I hadn’t wanted to think about it before; I hadn’t wanted to write about it; I hadn’t wanted to accept that this shadow was back in my life.

Here’s the thing though: shadow and light together create beauty. When I was a freshman in college, part of my routine was a dialysis exchange in the middle of the day. I would sit in my parents’ living room and look out their big picture window, luxuriating in the sun like a cat, because dialysis makes me so cold. My mom had planted a beautiful tree in the courtyard, with slender branches covered in tiny, dancing leaves, and I was fascinated by the patterns the tree would make on the sidewalk beneath it. I used to watch it for the entire hour-long process, and eventually I started calling the shadowy, intricate patterns on the cement shadowlace.

My life has become synonymous with, and informed by, shadowlace. I am surrounded by beauty, and love, and delight, and I have learned to recognize these things clearly because of the dark patches. Whoever I am, and whatever I am becoming, it is happening because I have been in the shadows, and I am ready to write about it now.

I am going to plug writing a blog post into my weekly schedule, so, for those who are interested, I hope I have enough of interest to say. Kohl told me that I need to let more people in, to use this experience as a way to reach out and help others, so here come the shadow and the light of my life.